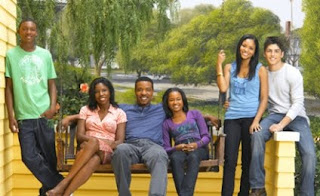 If you missed the opportunity to watch this drama series on ABC Family, you truly missed a well-written and overall excellent drama. Lincoln Heights was a drama series centered around the Sutton family. Eddie Sutton, a police officer moves his family back to his old neighborhood of Lincoln Heights. The series was filled with all the trials and tribulations of the family adjusting to a new neighborhood, school, and friends.
I started watching Lincoln Heights during Season 1 which premiered in January 2007. The series was a must see every week, I immediately loved the strength of the Sutton family and how two working parents juggled raising their three children. Season 2 premiered in September 2007 and again I was hooked on the drama series. Season 3 premiered in September 2008 and the story lines were getting better and better. By this time I was setting the DVR so I did not miss one episode. I periodically checked the ABC Family website in anticipation of the next season. Season 4 premiered September 2009 and the drama was living up to my expectations for bringing the drama that I loved so much. In the past few weeks, I noticed an air date on Tv One for the Lincoln Heights series. I thought this was a little strange since Season 5 was soon to start. I read Season 3 premiered with the highest ratings in the series’ history which indicated to me the lack of marketing for a drama with a wonderful story.

Today I received a tweet from @savelincheights informing me ABC Family cancelled the series. It amazes me when networks cancel extremely worthy shows and there is no announcement or closure to the story lines. I would love to know if the series was given a fair share of the marketing budget to really promote the series. When I saw the three female cast members on the Monique talk show, I was glad to see it was finally getting exposure outside of the ABC Family network.

I hope another network picks up the series because the story of the Sutton family was a drama masterpiece. My best to the wonderful cast and I hope to see you again soon. Bravo, Bravo!