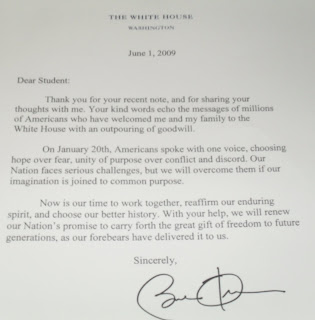 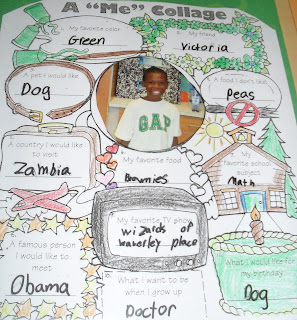 In my never ending quest to get organized I was going through my little man’s school work and found his “me collage”. It was all about him, favorite color, what I want to be, what he wants, etc. You may notice he is really petitioning for a dog as it appears on the collage twice, just between us- the dog-never going to happen. Since the beginning of the school year I have tried tirelessly to get him to pick up a book for some leisure reading. He is definitely more of a writer than a reader. Shortly after the inauguration I encouraged him to write a letter to the President. I thought finally something to pique his interest when he put his pencil to paper. His letter basically congratulated the President and his family. In June my little man received a thank you letter from the White House. I noticed on his collage for the question – a famous person I would like to meet he wrote Obama-(President Obama).
When I am at my wits end and searching for some inspiration, I use President Obama as a reference for hard work and perseverance. Hopefully somewhere in my little man’s world among the bugs, Legos, bikes, video games, The Wizards of Waverly Place, Sponge Bob and all the other boy stuff there is room for some mommy wisdom. It is my dream he will one day thank me for being so super smart(as I sit with fingers & toes crossed)…….
This past weekend I went back to my Alma Mater, University of Pittsburgh for homecoming. My first time back since graduating was four years ago. This homecoming was historical because it marked the 40th anniversary of African American students taking over the computer center to invoke changes that addressed concerns of African American students, faculty, and administrators. For some of us it was the first time seeing one another in a number of years. What dawned on me is the fact most of us were now officially the big 4-0 and over, how time flies!
I ran into one of my college friends who I met in 2nd grade. We went to grade school, high school and college together. After college we kept in touch for a period of time and then were wrapped up in our own lives. We had not seen one another in 13 years and I asked her Did I forget to wish you happy belated 40th? or do is that a shhhh? She said no you did not, I think she wanted to keep it hush, hush. I have to remind myself each day that I have entered another age category especially when completing forms with a question for age. I remember for some time being able to check the box that had the 30-35 and then 36-39, now I have to really pay attention before answering. Oooh, that day is gone!
One thing my friend said is “40 is the new 20”, is it? My body may say otherwise but I feel like a 20 year old in spirit…I also saw this phrase printed on a tshirt worn by Courtney Cox for her new ABC show, Cougar Town.
What do you think, is it the new 20? Here we are back again……… 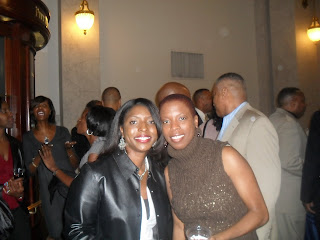