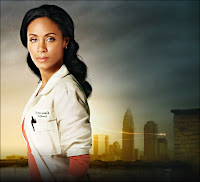 Don’t forget to tune in tonight at 9:00 PM EST on TNT for the series premiere of Hawthorne, starring Jada Pinkett Smith, who plays Christina Hawthorne.
Character Bio:
Christina Hawthorne (Jada Pinkett Smith) is the tough-yet-caring Chief Nursing Officer at Richmond Trinity Hospital. She prides herself on standing up for her patients and preventing them from falling through the cracks of hospital bureaucracy. She’s a hero who acts out of good intentions, even if she occasionally violates hospital policy or protocol in the process. But being there for her patients means she isn’t always there for herself and her daughter. She is trying to move on after her husband’s death, but she hasn’t really had time to grieve because of her work duties. Her relationship with her teenage daughter can at times be strained, especially when Christina puts the hospital first. Still, she is a loving mother with a creative way of handling family issues.